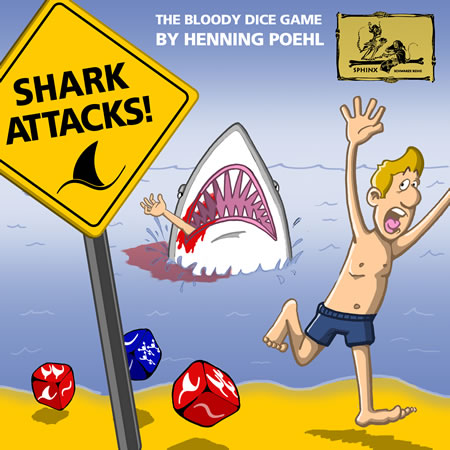 Read more about the game.

A new edition of our game Rolling Bones was launched in the U.S. by SimpyFun.

We have sold the last copy of „Rolling Bones“ today.

The game is SOLD OUT.

You find now in our download-section a scoring sheet for „Rolling Bbones“.

There are a spezial preoder prices for the game Rolling Bones (23% discount). 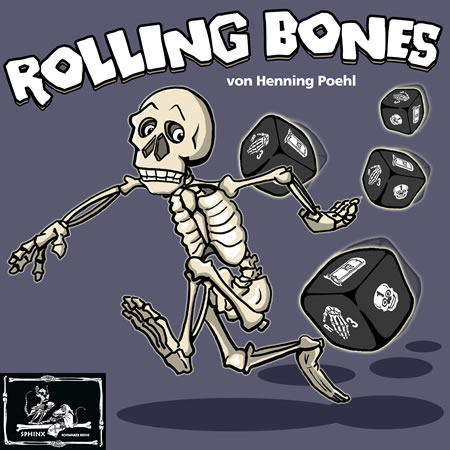 Rolling Bones – The morbid dice game – will appear in a strictly limited edition of 500 copies!

During the pre-production phase of „Rolling Bones“ you can pre-order it for a special price here.

The Game High Frontier from Phil Eklund (Sierra Madre Games) is now completely sold out (in Europe and USA).
Also the part of the expasions for the European market are sold out now.
The rest of the expansion are available by Sierra Madre Games America.
A new edition of the game is not planned.
Currently Phil is working on his new game Terra Genesis.

Sphinx at the Spiel’10 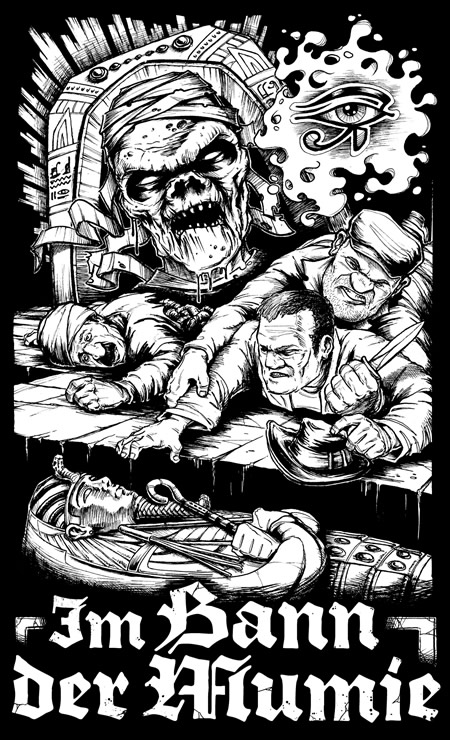 Hunt for the lost treasures of the forever damned in the valley of dead Pharoaohs. Nobody has ever escaped the fatal curse of the mummy. Greedy tomb robbers should never forget what dwells in the depths of hell. Unspeakable horrors lurk hidden in the sand here.
Can you already feel the spell of the mummy enveloping you? Can you escape it?

And can you learn enough to escape the next curse?

„The Curse of the Mummy“ is an exciting game where one player assumes the role of the mummy, and tries to prevent the others from plundering its treasures.

You can buy the game here in our Shop (German).

The most scientific sci-fi game ever produced! 2 – 5 players design rockets to explore and industrialize the solar system. They will need to find water as reaction mass for their rockets. Points are awarded according to the scarcity of the space-products produced, glory, colonies, and mega-engineering projects.
NOTE: The games have been printed, but will not arrive until the first week of October, and will not be shipped until then.

A boxed game with rocket, freighter, and factory plastic pieces, along with rules, patent cards, rocket diagrams, and a mounted „delta-v“ map of the inner solar system. The basic game goes out as far as the asteroids of the Main Belt and the Jovian Trojans, and the expanded game (also available Oct 2010) adds Jupiter and Saturn.

When people finally emigrate into space, the motivation will be space nanofacturing using processes possible only in zero-gravity and high-vacuum conditions. The key to economic production is finding water on suitable worlds, for rocket propellent and life support. Also key is designing efficient rockets and the remote-controlled machines called robonauts to do the grunt work. Each space mission must be flexible due to changing conditions and emergencies. A chart keeps track of supply and demand of various space products.

For a detailed description of how the game plays, and a game report, see the BoardGame Geek thread.

For the latest in tips, optional rules, errata, and science, as well as peek at pdf images of the map, cards, rules, and charts, join the High Frontier yahoo group

You can buy the game here in our Shop (German). 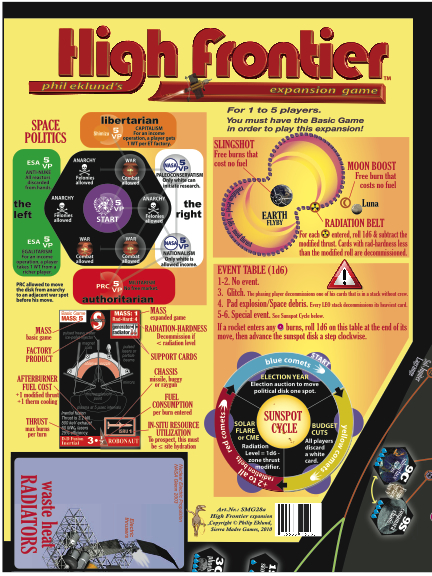 „Can I refuel on Deimos on the way to Enceladus?“

„Can my mining laser be modified as a weapon?“

„Can I build a microbial fuel cell for my drive?“

Expansion to the space exploration game HIGH FRONTIER, a comprehensive simulation of near-future exploration, which requires clever resourcefulness in a hostile environment.

This expansion adds an extension that doubles the map, to include Jupiter, Saturn, main belt comets, & centaurs. An event cycle keeps track of solar storms and other seasonal dangers. The expanded rules include slingshots, radiation belts, piracy, combat, & space politics. There are also 24 new patent cards, representing reactors, generators, & radiators. The expanded scenarios include alien invasions, the solitaire game (Earth is threatened by an asteroid impact), and two short games.

You can buy the expansion here in our Shop (German).